Garry A. Cornell, Sr., a life-long resident of the Columbus, Ohio, area, is internationally known in his field as a music composer and arranger.  His long list of compositions (over 400 in all) includes works for choirs (church, school, community, academic, etc.) instrumental music for solo instruments and ensembles (including symphony orchestras and concert and marching bands,) works for musical theater as well as commercial advertising.  His works have been featured in international broadcasts via PBS and on commercial television, and have been widely performed by amateur and professional musical groups in America and abroad.

Garry A. Cornell serves occasionally as guest director and/or conference leader for musical and       creative events in many parts of the United States.  He is a long-time member of ASCAP (American Society of Composers, Authors, and Publishers) and has received annual ASCAP awards for many   years, recognizing his ongoing contribution to American music.

Garry attended Capital University Conservatory of Music, Columbus, where he studied harmony, theory, and composition with William S. Bailey and where he received awards in composition.  He has also studied at St. Olaf College and Trinity Lutheran Seminary.

In 1977 Garry established his own music publishing enterprise, Celebrations Unlimited, which has established itself as a respected publisher of music, primarily choral music, and includes works by many of America’s top choral composers and poets.  (See http://celunlmusic.com)

Garry and his wife Donna have two grown children and eight grandchildren.  He recently retired after fifty-five years as a church musician, the final thirteen years as Director of Music at St. Andrew Presbyterian Church, Columbus.  Upon his retirement St. Andrew honored him with the honorary title of Director of Music Emeritus.

Mr. Cornell will be at Hallowed Hills on Thursday, August 7, to work with Encore! participant Casey Hull, who is studying composition at the University of Cincinnati.  Mr. Cornell will also rehearse the Choir in his composition written for Encore! – “Come, Lift Your Voice and Sing!”

John Carter and Mary Kay Beall have been writing partners since 1978. Together 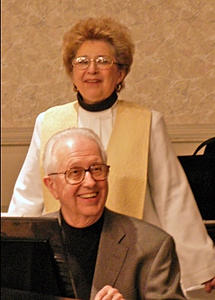 they have created over a dozen musicals for schools, an opera based on the book of Ruth, several children’s musicals produced by The Columbus Children’s Theatre (Wheels, Sky Happy, A Fabulous Fable of Feathers and Folly & Dragon Tale) , two summer theatre musicals produced by Weathervane Playhouse (Seasons & Sweet Corn), hundreds of anthems for churches and schools, and many new hymns, most of them in published collections (i.e. Hymns for a Troubled World, Hope Publishing © 1991) and God Gives Us a Song, (Hope Publishing, © 2010). In addition to their collaborative efforts, John has created nearly sixty collections of hymn arrangements for piano. Mary Kay has created lyrics for many other composers, written tunes and texts for many of her own sacred compositions, and published a devotional collections for church musicians entitled Singing in the Spirit, (Hope Publishing, © 1998).

John and Mary Kay taught music for many years (John… high school and college; Mary Kay elementary and junior high) and both have been church musicians for most of their lives serving several denominations. They were both long-time Editors for Hope Publishing Company in Carol Stream, IL. and represented the company across the United States and in Canada. Mary Kay was ordained in 1999 and served as the founding pastor of Tree of Life Community Church in Columbus, OH.

They have been active members of The Hymn Society of North America and Canada for many years and recently created and led Morning Prayer services each day for the 2014 Hymn Society Conference in Columbus, OH held on the combined campuses of Trinity Evangelical Lutheran Seminary and Capital University.

John currently teaches Music Composition at Trinity Seminary. Mary Kay served as the UCC Chaplain at Chautauqua, NY in August of 2013 and often provides pulpit supply for area churches. She is completing a book for Spiritual Seekers based on The Wizard of Oz and titled, Lions and Tigers and Bears, O My!. Mary Kay and John are active members of First Congregational Church in downtown Columbus, Ohio.