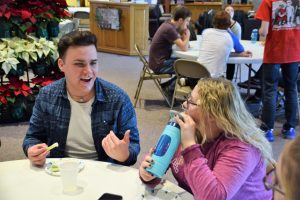 The Cardinal Chorale is back together again! After a long five months apart, we met each other with many hugs and how-have-you-beens at Epiphany Lutheran Church in Pickerington. Seeing each other again was wonderful; we could all feel the love everyone has for this group.

A brief warmup and rehearsal in the morning was followed by some sectional time. After practicing a few of the harder songs such as “A Choral Fanfare” and “The Nearness of You,” we came back together for another full rehearsal. A little while later, we enjoyed a wonderful taco bar for lunch with our Opera.

Not much later, we were back to rehearsal. It was obvious most of us looked at our music over the last five months. The sound we produced was amazing given the long amount of time we’d been apart. As Mr. Snyder always says, “this should be impossible.” 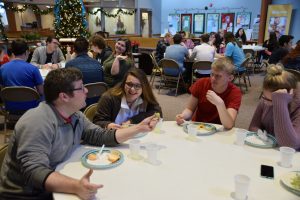 A few short breaks and some rehearsal later, we were all ready for a snack. After some relaxation time full of jokes, stories, and snacks, it was back to the grind. Soon, however, we were worn out and everyone could feel it. The obligatory Chorale nap-time was followed by a fantastic dinner of noodles and mashed potatoes. The Chorale also presented Mr. Snyder with a brand new Cardinal Chorale briefcase for Christmas. We thanked Mama Hildreth for preparing our meals and were off to get ready for the concert.

“Being with the Cardinal Chorale is like a second Christmas.” -Jordan Conner

Soon after, we were holding hands in our Chorale Circle, sharing hopes for the concert and highlights of our day. Everything from getting the words for “Do You Hear What I Hear?” to hoping to send chills down someone’s back was mentioned, and then we were ready to line up. 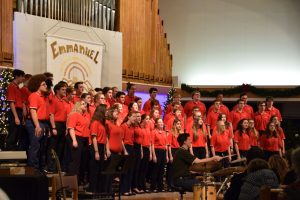 The concert that followed was amazing. After spending so long apart, we were grateful to be singing together again, and you could tell. The blend was wonderful, our dynamics were amazing, and the hard songs didn’t seem so bad. We were singing together again, and that was all that mattered. The concert ended what felt like minutes later, and all too soon, we were hugging goodbye and grabbing cookies for the road. We left with full hearts, ready to meet again in January for our reunion concert.